In its day, the Clymer Münch Mammoth (above) was possibly the fastest machine on two wheels. A hulking beast, it used a car engine and has a growling engine note to match.

Only around 150 were ever produced, so when a well-preserved specimen came to auction in April, collectors dug deep into their pockets. In the end the bike went under the hammer for £154,940, a world record for the type.

That was a reflection of the Mammoth’s rarity, but also of a growing collector interest in rare motorcycles. 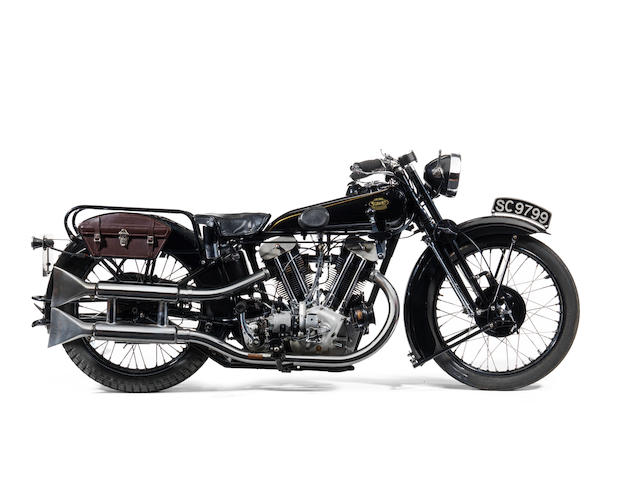 James Stensel, (Head of Bonhams Collectors’ Motorcycles UK) said: ‘The result exceeded all expectations and demonstrates the strength of the Brough Superior market.’

The Brough brand is an enduring favourite of collectors. The firm was only in business for 21 years (between 1919 and 1940), but its bikes have endured with experts estimating that around one third of the 3,000 or so machines ever produced still survive to this day.

The Brough will also forever be associated with TE Lawrence (Lawrence of Arabia, who owned eight of the machines and was ultimately lost his life in an accident while riding one).

Leaving aside celebrity associations collectors also focus on design classics, barely used superbikes that have been mothballed and even bikes made famous by their ugliness or unpopularity.

Firmly in the latter category, but highly sought after nonetheless, is the Aprilia Moto 6.5 (above). Designed by Philippe Starck in the 1990s, it proves that even creative brilliance sometimes goes astray.

Unprepossessing in appearance, some said it looked like a teapot on wheels, somewhat unreliable and in available in rather eccentric colour schemes, the Moto 6.5 cut short Starck’s bike designing career, but is now both rare and highly sort after.

At the other end of the looks scale is a model such as the Ducati 750SS Project, a shapely 1970s classic, one of which sold for more than three times its pre-sale estimate (£106,780) at Bonham’s April sale.

To watch a video of Bonhams’ Spring sale of classic motorbikes, click here.